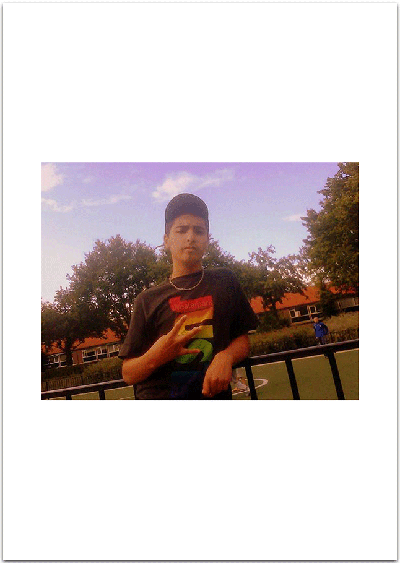 In 2009 the negative media attention for Moroccan youth, more specifically boys, was on its peak in the Netherlands.
According to the media, boys of Moroccan descent living in the Netherlands, most of them born there, were supposed to be aggresive, noisy and often criminal.
The one-sided media coverage had an effect on me I did not expect: even though I did not know any of these boys I became suspicious.
When I would have to walk by a group of Moroccan boys I would rather cross the street. I became aware: jugmental wihout any reason - the media coverage clearly
influenced my thinking.

I decided to investigate my feelings and try to find out whether the negative attention was by any means justifiable
or whether it might just be the exact opposite.
But, because of the awarness within the Morocaan community of the media, it proved difficult to find boys who wanted to participate.
I decided to turn to the internet and placed an ad on a website. Almost instantly I received replies.
Without me having asked for any images, the boys sent photographs with their application. They were simple photographs, often blurred and of bad quality
but it showed them as they wanted to be seen, sometimes though, sometimes like tourists in front of monuments and sometimes all dressed up -
like all teenagers they were trying to explore different roles.
I used exactely those images but also received a reaction I did not expect:
a Dutch citizen who had been bothered by Moroccan youth and was concerned my project would give a positive view on them.
In the presentation I set the photographs and the e-mail exchange opposite to each other.